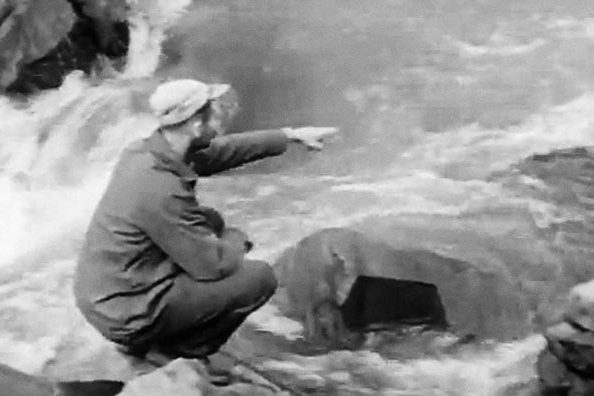 Babine Lake has been home to the people of Nat’oo (or Nat’ooten) for as long as humans have inhabited North America. They’re thought to have immigrated from the Athabaska heartland millennia ago.

This semi-nomadic people thrived on the region’s abundant salmon, berries, sheep, deer, caribou, moose and bear. They spoke Babine-Witsuwit’en and traded with the Gitxsan, Kootenee, Titneh, Nutseeni and Wet’suwet’en. Mysterious petroglyphs still testify to their long occupation of the area.

When European settlers arrived around 1813, they found at least four flourishing Nat’ooten villages (Nass-chick, Nah-tell-cuss (now Old Fort), Tachy, and Wu’dat. In 1822, the Hudson’s Bay Company established a trading post at Old Fort. It was later moved to Fort Babine, which received a road link and electricity in the 1980s.

Culture and tradition remains strong among the Nat’ooten, today known as the Lake Babine Nation. More than half of its 2,200 members live in the lakeside reserve communities of Tachet, Fort Babine and Old Fort, as well as at Woyenne, near Burns Lake.

Copper and gold were discovered here in the 1920s. Mining began in 1965, when Granby Mining and Smelting Ltd. built an open-pit copper mine on Sterret Island in Babine Lake. Noranda built a second copper mine on the nearby Newman Peninsula in 1972.

The Village of Granisle was named and built by Granby Mining and Smelting Ltd., primarily to house workers and their families. Incorporated in 1971, the Village grew to include a store, gas station, post office, library, school, RCMP, medical centre, community hall, interdenominational church, curling rink and hotel. By 1979 almost 2,000 people called Granisle home.

In June 1971, during stripping operations at Noranda’s Bell copper mine on Babine Lake, the bones and tusks of a Mammoth were uncovered. The Geological Survey of Canada was notified, and Tipper, who was working in the Smithers area spent two days at the site excavating fossils. The bones exposed were concentrate in a small area about 100 ft. (30.5 M) square. The bones of a partially articulate mammoth skeleton lay in silty pond deposits in a bedrock depression and were overlain by a thin layer of gravel and a thick layer of glacial till. Replicas of some of the bones as well as a small piece of the petrified tusk can be seen at the Granisle Information Center/Museum.

Mammuthus columbi An average Columbian mammoth, stood over 12 feet tall at the shoulder and weighed over 10,000 pounds. The mammoth’s primary diet consisted of grasses, which was quite different from the diets of their modern relatives, the Indian and African elephants. Yet, like these elephants, the Columbian mammoth had a set of four teeth that was replaced by new sets as the older teeth eventually became worn. This type of tooth replacement continued to produce six sets over the course of about 60 years and then, like all elephants, the mammoth would starve as the final set wore out.